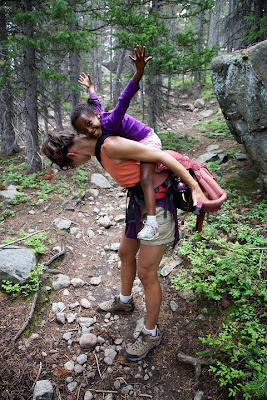 Your children are not your children.
They are the sons and daughters of Life's longing for itself.
They come through you but not from you,
And though they are with you yet they belong not to you.

You may give them your love but not your thoughts,
For they have their own thoughts.
You may house their bodies but not their souls,
For their souls dwell in the house of tomorrow,
which you cannot visit, not even in your dreams.
You may strive to be like them,
but seek not to make them like you.
For life goes not backward nor tarries with yesterday.

You are the bows from which your children
as living arrows are sent forth.
The archer sees the mark upon the path of the infinite,
and He bends you with His might
that His arrows may go swift and far.
Let your bending in the archer's hand be for gladness;
For even as He loves the arrow that flies,
so He loves also the bow that is stable.
Posted by Sarah at 7:12 PM No comments: 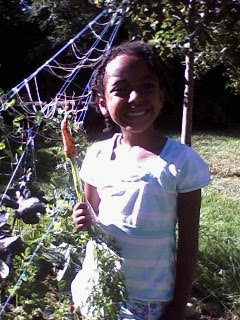 TK's questions, as we garden together, are as much sun and good sustenance to me as I am trying to give our plants.

TK: "Mama? Why are there no mommy-long-legs?"

TK: "Mama? If God put the baby Jesus in Mary, then does God have a penis?" Pause. "I think God has a penis AND a vagina."

TK: "Mama? Are there bad bugs, or are they just making bad choices?" 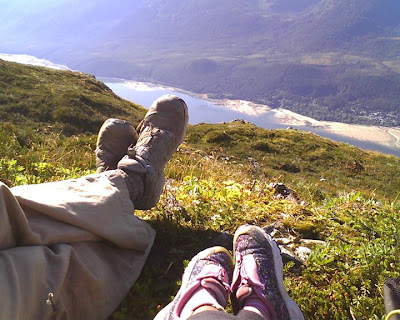 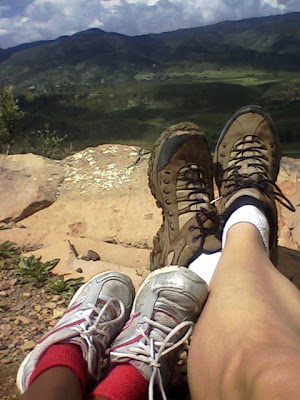 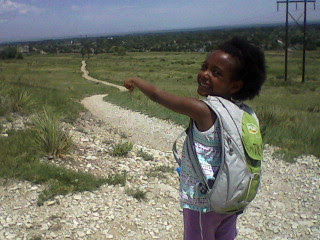 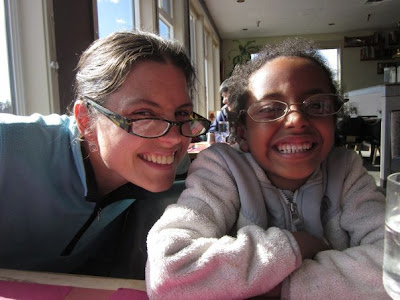 Easter. Ancient religions -- pre-Christianity -- celebrated the triumph of new life over death at this time of year. Every tradition still whispering in store aisles -- painted eggs, the Easter bunny, chicks, bunches of tulips -- pays homage to joyful pagan rituals that life returns. That's why the Christians chose to celebrate the resurrection at this time of year, but that's for a different blog. This is TK's blog, and so I must say this: I have never met any person who celebrates Easter so fully, in her whole soul. Some glimpses:

1. It is snowing. In April. I am walking grumpily behind TK, who is pedaling her pink and purple bike down the sidewalk. I long for sunshine, blue sky, warmth. Suddenly, I look up and notice that a man walking in the other direction is grinning at TK. A group of teenagers at a bus stop are smiling at her. I throw my grumpiness aside enough to listen. My daughter is singing "Jingle Bells" as she pedals! "Jingle bells, jingle bells, jingle all the way! Oh what fun it is to ride to bi-i-ike today!" My grumpiness melts like the snowflakes do as they land softly on the sidewalk.

2. It is a rare sunny day in Juneau, and the annual Alaska Folk Fest is on. TK and I are sprawled on the greening brown grass beside other children and parents, listening to musicians jam in small circles, watching as a woman hula-hoops in the center. The sky is blue, and the clouds are luminescent. Along the edges of this music-filled space, purple and yellow crocuses are blooming. TK spreads her arms and legs wide on the grass. "Ah, Mommy," she exclaims, "yay for spring!"

3. Every day that TK's at preschool, I receive a little written report from her teachers. As a harried teacher myself, I'm always amazed that the preschool teachers manage to write these half-page narratives about every child, every day. As a parent, I treasure them. Almost every one of TK's says some version of this: "TK had a blast today," "TK was so joyful today," "TK laughed most of the day today". I work to learn from such a daily decision to live in life's joy.

4. A teenager at the Unitarian-Universalist Fellowship jokes to TK, “Easter’s the day we all celebrate when the Easter Bunny rose from the dead!” TK refuses to believe him. She informs him instead that the Easter Bunny didn't die, and if he did, he's coming back, because that's what he DOES. On Easter morning, when she runs out of her room to find a pastel-colored basket, a note from "Osterhar" (the Easter Bunny's German name!) and eggs hidden all over the living room, she nods confidently: "I just KNEW the Easter Bunny would come back. He always does."

5. We wander through the woods, collecting treasures and listening carefully for fairies. "Listen, Mommy!" TK whispers, cupping her small hand around her ear. "I hear the swush-swush of their wings!" We listen together, and then we creep forward along the trail, until we spot a small niche in a hemlock tree -- obviously a fairy house. "We need to leave them craisins," TK pronounces solemnly, and with her mittened hand, she leaves a handful of craisins, an offering, a gift. I believe beside her. The very trees seem to thank her.

6. On Facebook, my mom posts the photos of our March trip to Sitka -- a week from which I'm drawing strength like those crocuses must be drawing strength from the bulbs beneath the ground. In every photo, I look exhausted and worried. I suppose I'm still underground. But not TK. In every photo, TK is grinning -- beside the impressive circumference of a fallen tree in the rainforest, with raspberries on all her fingers, with my mom's glasses on, with her special "water backpack" (a Camelback) on her back. I'm clearly this child's parent, but she reminds me how to taste the world and love it, daily, moment by moment.

7. After a snuggly evening watching a Care Bears movie (remember those little pastel-colored bears with the symbols on their tummies and the moral messages in their stories?), I idly ask TK what kind of Care Bear she thought SHE would be. She doesn't even hesitate. "I'd be Morning Sunshine Bear," she says. I think of the mornings in my life I've woken to sunshine -- the warmth of it, the good grace of it, the hope of it. And I'm sure that's exactly the kind of bear my child already is.
Posted by Sarah at 10:38 PM 2 comments: 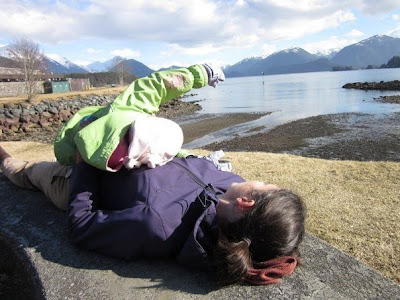 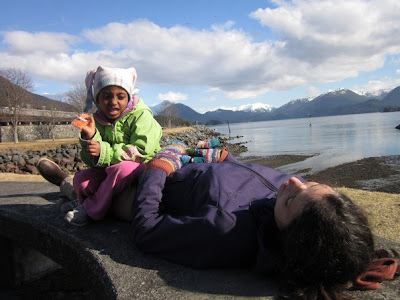 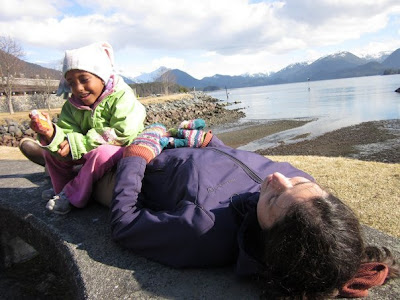 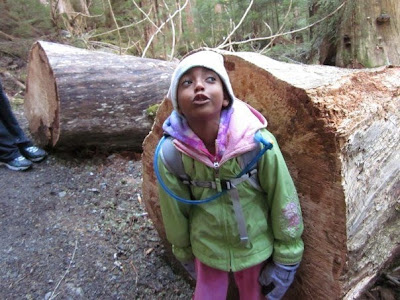 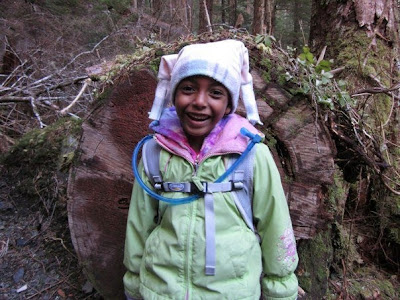 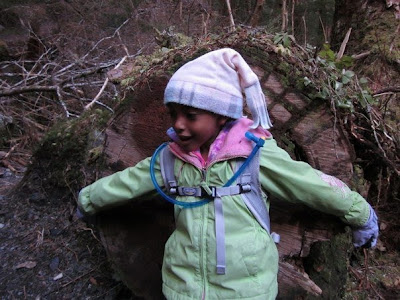 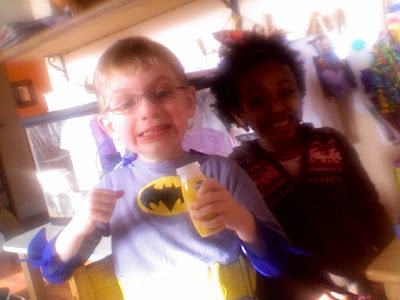 TK and Nick are superheros today, and I -- merely the mother, after all -- am the office secretary. The game is this: as TK and Nick "work" at play cash registers in their "office" (a Bob-the-Builder tent in the corner of Nick's living room), I am stationed on the couch fielding phone calls from the many imaginary and quite distressed citizens of Juneau who need superheros to save the day.

"Oh! Calling Batman and Super Purple Girl!" I call out. Batman emerges from the Bob-the-Builder tent, his black bat ears askew, his glasses falling down on his nose. Super Purple Girl steps out slowly, concentrating on the sparkly pink lip gloss she is applying to her lips. I clear my throat, ever the good employee. "Downtown Juneau is being attacked by enormous evil butterflies!" I announce. "Will you deal with it?"

Super Purple Girl throws her lip gloss aside, and thrusts her arms into the air. Batman strikes a manly pose with both hands on his hips. "Yes!" they shout together, and they pretend to launch themselves into the air, running pell-mell down the white carpeted hallway toward Nicky's room, where ZAP! and POW! are the sounds of the defeating of evil butterflies.

When they return -- inevitably sporting pretend injuries and exhaustion -- I always breathe out in secretarial amazement: "Oh, wow. You superheros saved the day again!" Nick and TK puff up with pride, and then disappear again into their office until the next phone call. . .

And I perch on the couch, thinking. TK doesn't play superhero with her girl friends. She and her girl friends rock dolls to sleep; they dress up in pink princess crowns; they dance wildly to hiphop music. Actually, TK plays like that with Nick, too. But I'm not just contemplating how special of a friend Nicky is. I'm thinking about superheros, and my daughter's ardent belief in their real ability to save the day.

For about a year, TK has quietly insisted she will grow up to become a teacher or a doctor, and then return to Ethiopia to help people there. Already a girl with a strong sense of justice and empathy, she has recently developed a grown-up look about her when she discusses her birth country: she sets her jaw, and looks out into the distance, announcing that she'll make it better there when she gets older. A few weeks ago, when the two of us were sharing dinner, she brought it up on her own. "Mommy," she said quietly, "in Ethiopia, lots of people don't have enough good water."

"And lots of people can't get to doctors." Her little brow furrowed. "Like my birth mommy. She couldn't get to a doctor."

I pulled her off her chair and onto my lap and held her close. "Isn't that why you say you want to be a doctor, sweetheart -- and go back there?"

She sat up straight suddenly and lifted her little chin. "Not a doctor, Mommy! I'm going to be a superhero when I grow up, and I'll go to Ethiopia and save the day -- for everyone!" Her deep brown eyes flashed.

I held her closer, wishing superheros were real.

But a week later on another night, the two of us were engaged in a pretend battle between Monster (me) and Super Purple Girl. I tramped into the room, growling and clawing the air, announcing that I wanted to eat little children, when TK leapt off the couch in superhero pose, her hands flipped palm up to me.

"Aaarrrrr!" I growled. "What are your powers, Super Purple Girl? You can NEVER defeat ME!"

"My powers," Super Purple Girl proclaimed in her biggest voice, "are that I LOVE YOU!"

And so the monster melted, and was glad to be defeated and hugged tightly on the couch.

And so TK's dreams of helping Ethiopia are possible, too -- more possible than any mere secretarial mother may be capable of imagining.

I must get back to work, though. The phone is ringing off the hook with distressed citizens, and the superheros will need a snack soon -- and no one can defeat evil butterflies or slime monsters without a little yogurt and some goldfish crackers in their bellies first. . .
Posted by Sarah at 8:48 PM 2 comments: