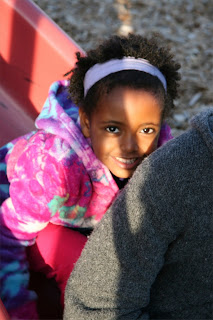 When I pick up TK from preschool the day after Martin Luther King, Jr. Day, one of her teachers crosses the room (with TK, who always deserts whatever toy with which she was playing to sprint pell-mell into my open arms) to give me the daily report. Usually, I hear a funny story -- TK pretending to drive a bus for her preschool friends, TK chasing a "dinosaur" across the playground. The teacher, Ms. A___, who is African American and wears her hair (as TK has observed) in the same beautiful "sproings" that TK does, begins to laugh. "I've got to tell you about how TK responded to the Rosa Parks story we read today," she says.

Now that I've heard the story, I can imagine the scene perfectly. I know my daughter. I imagine Ms. N____ perched on the edge of the rocking chair, holding a children's book about the Civil Rights Movement out for the small crowd of preschoolers to see. Ms. N___ reaches the story of Rosa Parks and explains she was a lady who would not get up from her seat on the bus -- and TK stands up, her brow furrowed in serious concern. "That's not okay!" she calls out. Ms. N___ tries to explain that people like Rosa Parks were actually prevented from sitting where they wanted to by an unfair law, but TK is still standing, her little legs apart, her brow still furrowed. "She was SUPPOSED to get up, right Ms. N___?" Ms. N___ sighs, smiling a little, and then continues to read, explaining to the children that Ms. Rosa Parks was then sent to jail. "Oh!" interjects my rule-following child, "That's good."

As Ms. A___ relates all this to me, she's shaking with laughter, and so is Ms. N___, who has joined us. TK looks up at the three of us and decides to laugh, too, though she doesn't know why. I laugh because my child is so good that she can't imagine a time when the rules are supposed to be broken, but I'm also aware of the strangeness of this moment. Ms. A___ and Ms. N___ (who is Hispanic) are both women of color; both hear the Rosa Parks story through far different lenses than I do. More: someday, Mitike will hear the Rosa Parks story through one of those other lenses, too; someday, Mitike will ask me why our nation -- in its recent history -- would have allowed such racism to be inscribed in law; someday, Mitike will realize that, had she and I boarded that bus, I would have gotten to sit wherever I pleased, and she would have had to choose to sit in the back or to break the law as Ms. Parks and her fellow demonstrators did.

Outside the preschool door, TK and I race each other down the long hallway to the door. At the door, I say, "TK, you know that story about Rosa Parks, the lady on the bus?"

She nods sagely and says, "The lady who wouldn't get up!"

"That's right," I tell her. "She was trying to change a rule that wasn't fair. Some people made a rule that she and other people like her could only sit in the back of the bus, but everyone else could sit where they wanted to." I am not brave enough to talk about skin color. TK hasn't started categorizing people like that yet (the researchers say that kicks in around age 4 or 5); I am "light brown" or "coffee with lots of milk" and she is "dark brown" or "chocolate".

But TK gets it. "It was good she wouldn't get up."

I look down at her, so small beside me in her purple coat and her purple stocking cap. She holds my hand and gazes down to the stream that flows beneath the bridge we are walking across. I watch her for a moment, and then answer, "Yes, sweetie?"

"Mommy, at the store, can we please buy yogurt and make it purple and pour in maple seri-up?"

I laugh and sweep her up into my arms, just as the city bus trundles by on the road. I glimpse the people lit blue-white inside, some standing, some slumped wearily into their seats. Mitike and I are walking home today, but if we wanted to take that bus, we could both sit in every single seat in the bus if we wanted to. And we can thank Rosa Parks -- and King, and all those other brave activists -- for knowing they had to break rules to create newer, fair ones. I know: teaching a three-year-old that lesson seems akin to the lessons about rebellion and revolution I'm currently teaching my middle school history students: knowing about necessary rule-breaking is not useful to them yet, since acting upon it will only get them in trouble with the grown-ups in their lives. But someday -- someday -- they'll need this knowledge like ammunition, like fuel, like bread, like a candle that shimmers in darkness. And someday, when my daughter sees someone break a rule because it's unfair, I hope she breaks it, too, as her heart beats wildly to the cadence of "That's not okay, that's not okay, that's not okay."
Posted by Sarah at 9:53 PM 1 comment:

How Purple Came Into the World 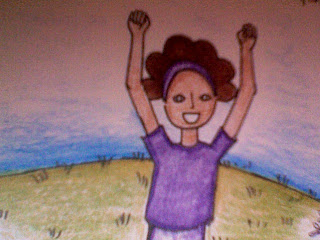 For Christmas, I wrote TK a little story entitled "How Purple Came Into the World". One of my 7th grade students illustrated it, and we gave it to TK together. In the story, the Creator (a feminine deity) saves the color purple for herself. . . until a little girl named Mitike tells her mommy she is sure something is missing from the world. Mitike's observation and her desire to see purple move the Creator to share the color.

TK loves the story. When we finish reading it each time, she sighs a little and then says, "I had to tell her purple was missing, right, Mommy?" She's utterly convinced of the story's truth and -- frankly -- so am I. I didn't notice purple the way I notice it now that Mitike is in my life; I didn't see so many things. For example, I shopped at Fred Meyers and walked right past the sofa arrangements, thinking they were just there to entice buyers. I never realized one could play "Living Room" for an hour and a half on those sofas (TK: "Now, why do all these PEOPLE live in our house?" ME: "I know! And why did we buy all these suitcases?")

I never thought to love tiny boxes of raisins or little cups. I never looked at a large cardboard box and thought, "That is a castle." I never ran out into newly fallen snow, stopped to look at my footprints, and then ate handfuls of the white flakes just because. I never realized stuffed frogs and puppies must be able to see the pictures in a book, too. I never thought about how funny toothpaste is, or about how good it feels to put on shorts on a winter day and run as fast as possible through the kitchen. I never thought to stop mid-run and yell, "DANCE PARTY!" I never stemmed my sadness with a phone call to President Obama on a toy purple phone.

I never thought to notice purple this much. Or maybe I did, once, and then I forgot when I grew up. Maybe being a mom is a second chance to see this way again. I drink in the perspective, thirstily. I'm so thankful for all that TK notices is missing from our world. Price-tagged sofas become a living room; a box of raisins becomes the day's best surprise.