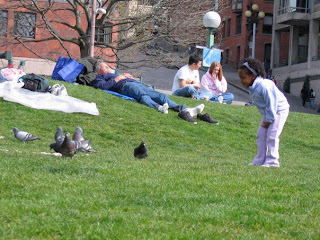 Mitike loves the Winnie the Pooh stories. She loves Piglet's timidity, she loves Tigger's unbridled energy, she loves Eyeore's wry humor, she loves Pooh's eternal optimism -- and she loves the way Kanga nurtures everyone. For all these reasons -- and because she loves to go to plays -- TK was excited to attend the high school's production of "Winnie the Pooh" last night. But as we watched, my daughter's brow became more and more furrowed. The high school actors had chosen to portray Pooh as depressed, Eyeore as bitter and -- worst of all -- Kanga as an aggressive, tough-love kind of mama who yelled to get others' attention. At one point in the play, Kanga actually hit Pooh over the head multiple times.

"Oh, Mommy," TK whispered in my ear, "that Kanga is so MEAN. The real Kanga doesn't do THAT!" She couldn't stop talking about it. On the walk home from the play, as her brother imitated Tigger's bounce and her sister talked excitedly about hugging the actress who played Piglet, TK kept asking why "the pretend Kanga" had been so mean. Finally, I scooped her up and hugged her close. "I love you, my sweet empathetic little girl," I whispered.

I think I used to think empathy could be taught. I think I imagined a parent -- or a teacher, or a pastor -- could model empathy for others and then guide children to emulate the model. But I did not teach my child to have this large of a heart. Even when she was barely talking -- just home from Ethiopia -- she sensed when others needed comfort. At a friend's house when TK was barely 2, the friend's voice caught as she told a difficult story, and TK climbed down from my lap onto hers. She knew.

At Gram's last year, TK's uncle Adam needed a nap after the 12-hour drive from Colorado, so he laid down in his room. He said he heard the pitter-patter of little feet, and opened his eyes just enough to see that TK had come into the room and settled in a chair next to his bed. She wasn't waiting for him to play (though she adores him); she just wanted to "keep him safe", she told me later.

Who is this child, who looks at me so lovingly sometimes that my heart catches in my throat? When we receive a wedding shower invitation for Aunt Katie and Uncle Adam in the mail, TK asks if she can take it into the kitchen. I follow her, wondering, and find that she is hard at work with her purple-handled scissors, cutting out the photo of Katie and Adam. She taped it to her wall in her room, "so they won't be lonely". When I show TK the photo of my mom's friend Lori, next to the news story of Lori helping build a playground for kids who didn't have one, TK rests her chin on her hands and gazes at Lori's picture for several minutes. "I'm so glad she's here, Mommy," she says finally.

At bedtime every night, TK pretends that her "friends" -- the stuffed animals with whom she sleeps -- are crying. Each night, she asks me to make up little stories about why the friends are sad, and then we work to help the friends resolve those problems. This is TK's favorite part of our bedtime ritual: she teaches Purple Bear that he has to share his toys with Dumbo; she explains gently to Monkey that it's okay that Sally's small, and that it's not okay to make fun of her; she asks Soft Bear to please let Purple have a turn sitting on her lap. Always, TK ends the little talk with each "friend" with a hug and a reminder that she loves them. I know I've modeled that for her, but I'm still amazed: how lucky are those stuffed animals!

She has an innate sense of justice, I think. I wondered why she was taking a different stuffed animal to preschool each day, curious about whether she felt a strong attachment to any of them. "Oh," she said seriously, "I want them to feel special, so I'm giving them turns."

Her empathy extends -- possibly most importantly, in these days of enormous discovery about herself -- to herself. TK has struggled lately as she's begun to realize that her skin color and hair are not like mine. She's especially begun to struggle with the dawning realization that she did not, in fact, grow in my womb, but in the womb of her birthmother in Ethiopia. We talk about it often, trying to understand. One night, TK sighed an enormous sigh and then said, "Mommy, I understand. But. . . I think I'm going to tell myself a stretcher and say I grew in your tummy."

Denial? Maybe. But I think the real Kanga would agree that everyone needs a little comfort sometimes -- especially those special people who spend so much energy comforting everyone else.
Posted by Sarah at 3:50 PM 2 comments: 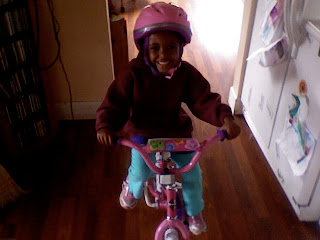 TK got her first "big girl" bike today. . . She biked all the way from home to library and back -- exactly one mile!
Posted by Sarah at 3:40 PM 1 comment: